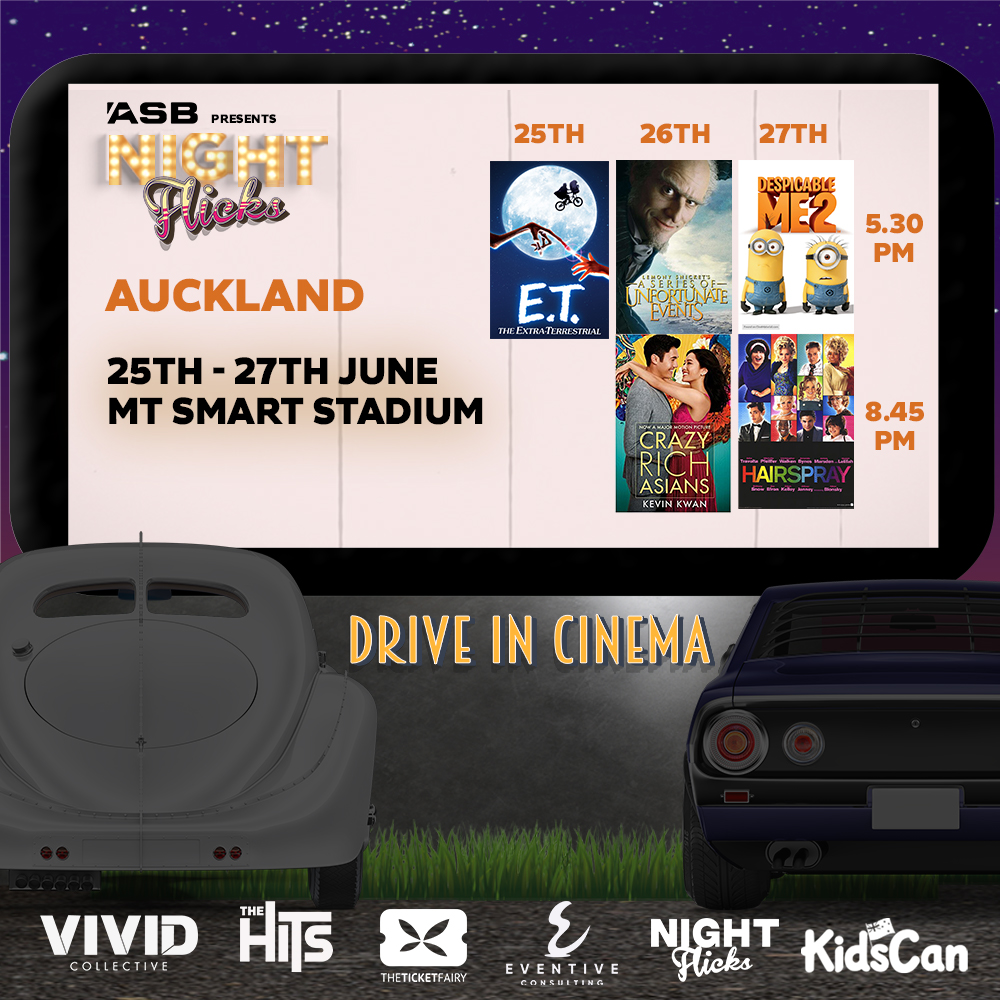 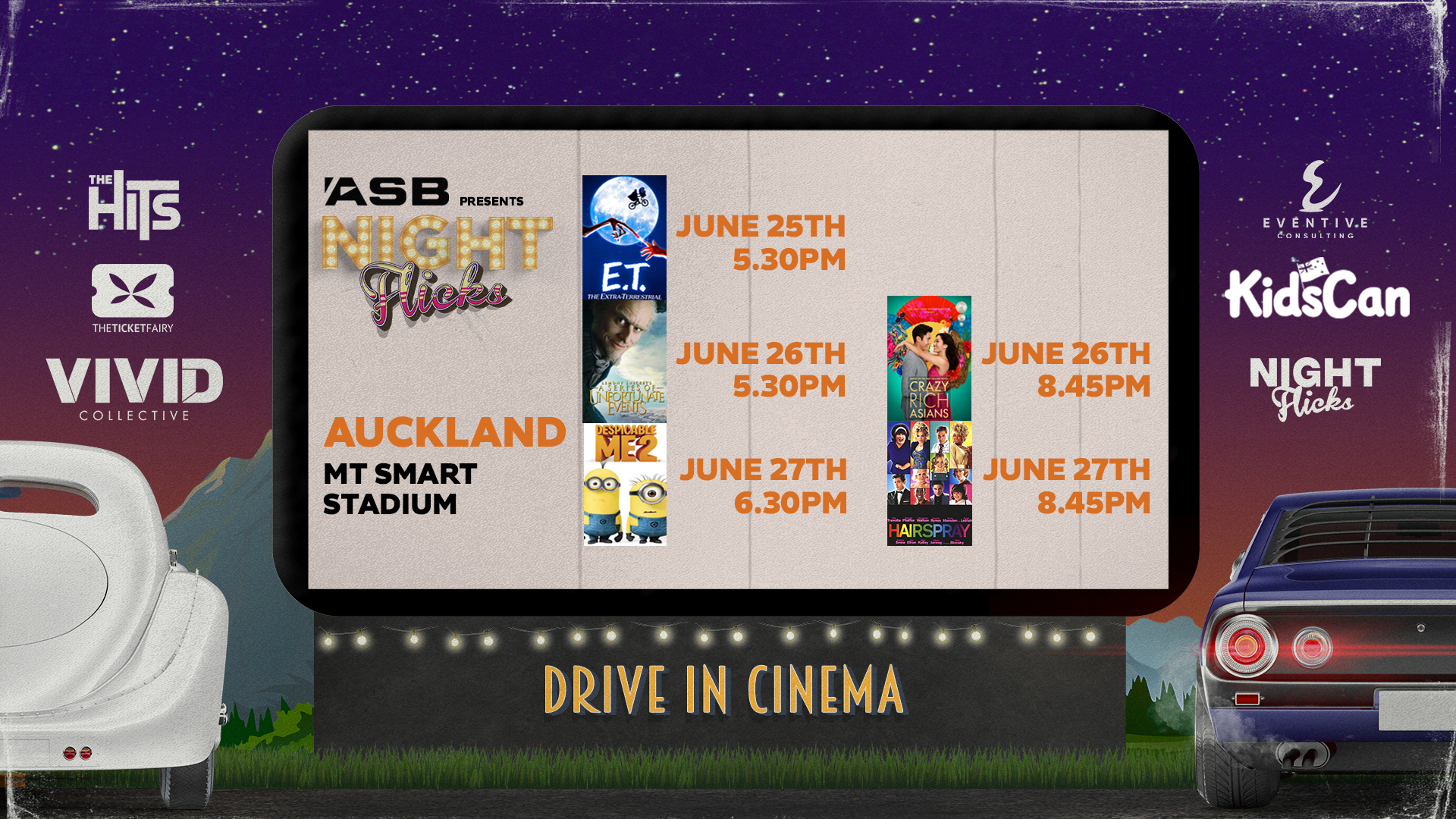 Drive in, park up and watch a movie at Mt Smart Stadium!

ASB Presents this Drive In Cinema to Auckland.

Kick back and relax while watching a handpicked selection of films from the comfort of your vehicle. The movie will be projected onto a large 36sqm screen and you'll need to tune into a dedicated FM radio station to get the movie audio! Yeah, you heard it right, it will be just like the golden age of the drive-in cinemas of the 1950s.

The health and safety of all patrons is of the utmost importance to us. Auckland Stadiums is working with Night Flicks and Vivid Collective to comply with and exceed the Ministry of Health guidelines. Check the FAQs below to read how patron health and safety will be maintained.

There will be 5 massive screenings from across Thursday 25th, Friday 26th and Saturday 27th June.

There are limited tickets, get in quick!

Relax and enjoy this great evening all from the comfort of your own car! There is a 4-person limit per vehicle permitted, $5 each for additional people available at checkout when purchasing your ticket online.

Tickets can be purchased online from Ticket Fairy here.

What vehicle types are accepted?

Can I reverse my vehicle in?

Vehicles parked at the rear may be reversed in, boots will need to be tied down as not to obstruct view of those behind.

Which entrance do I use?

Vehicles will enter from the O'Rorke Road entrance and will be directed where to go (view the Mt Smart Stadium venue map above). All vehicles entering the venue will be subject to a search.

Which exit do I use after the event?

Vehicles will exit from the Maurice Road entrance (view the Mt Smart Stadium venue map above).

What time do gates open?

What time do I need to be parked in the venue by?

The health and safety of all patrons is of the utmost importance to us. Auckland Stadiums is working with Night Flicks and Vivid Collective to comply with and exceed the Ministry of Health guidelines. Please do your part and stay home if you feel unwell. This will be a contactless event, precautions include contactless entry and purchase of food and beverages.

Toilet facilities will be available at all venues with staff on site to ensure regular cleaning and to make sure social distancing is being observed. You will be able to remain in your vehicles unless you have to use restrooms.

There will be no GA or outdoor seating options available.

There will be 5 massive screenings from across Thursday 25th, Friday 26th and Saturday 27th June.

About the film: An alien is left behind on Earth and is saved by young Elliot who decides to keep him hidden. While the task force hunts for it, Elliot and his siblings form an emotional bond with their new friend. This movie has a PG rating, parental guidance is advised.

About the film: Violet, Klaus and Sunny Baudelaire are sent to live with Count Olaf, a distant relative, after the death of their parents. However, they soon realise that he is only after their money. This movie has a PG rating, parental guidance is advised.

About the movie: Rachel, a professor, dates a man named Nick and looks forward to meeting his family. However, she is shaken up when she learns that Nick belongs to one of the richest families in the country. This movie has a PG-13 rating, it is not considered suitable for children under the age of thirteen.

About the film: When a new criminal comes to town, the Anti-Villain League decides to hire Gru in order to fight him off. While Gru initially refuses, he eventually agrees after his aide goes back to his evil ways. This movie has a PG rating, parental guidance is advised.

Mt Smart Stadium is a SMOKE FREE venue. This includes the use of e-cigarettes and vaporisers. No smoking is allowed inside the stadium or in your car however if you go to the main gate you came in and you will be scanned in and out to the smoking area.

At Mt Smart Stadium you can enjoy a world class stadium experience.  The stadium and its facilities are here for the use and enjoyment of a variety of visitors, patrons and public users.  As such, there is an expectation that minimal standards of behaviour and presentation are adhered to by everyone to ensure an enjoyable environment for all.  To achieve this, we have the following conditions of entry that all visitors to the stadium are required to meet.

Stadium management takes no responsibility for any damage to, loss or theft of a patron’s personal property while on Stadium property.

Items of value recovered after an event will be taken to the Mt Wellington Police Station.

In order to ensure an enjoyable experience for everyone, Stadium management reserves the right to deny entry or remove attendees who exhibit unacceptable or disruptive behaviour.  There will be zero tolerance for intoxication.  Those who arrive at the gates intoxicated will be refused entry and patrons who become intoxicated will be removed from the venue.

If in doubt, please leave it at home. Stadium Management takes no responsibility for goods surrendered.