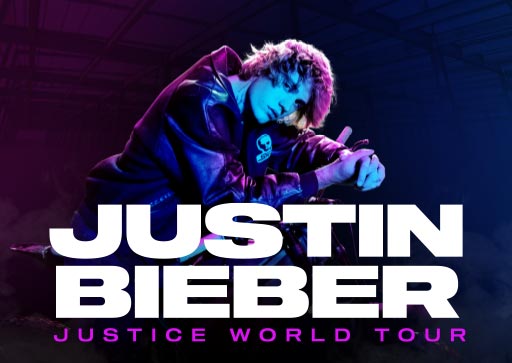 The ‘Justice World Tour,' is Justin’s first global outing since 2016/2017’s ‘Purpose World Tour’ - and it's coming right here to Mt Smart Stadium! Described by The Times of London as “mesmerising”, Bieber played to 2.7 million fans over the course of his 2016-2017 run, with the finale seen by 65,000 fans at London’s British Summer Time Hyde Park festival.

The ‘Justice World Tour’ is named after Justin’s latest smash hit album ‘Justice’.  Released in March 2021, it debuted as the most streamed album in 117 countries.  The album and its tracks have taken the already global pop phenomenon to new heights.

A limited number of exclusive VIP Packages are also available. These exceptional offers can include an amazing selection of reserved seated tickets, custom merchandise and much more.  For more information, please visit https://www.frontiertouring.com/page/justin-bieber-2022-auckland-vip-packages

This is a licensed, loud music event, staged over a long time and we do not recommend attendance by children aged 5 years and under. Children under the age of 14 must be accompanied by a parent or legal guardian at all times and have purchased a valid ticket.  No concession tickets will be available for children, they must have a ticket.