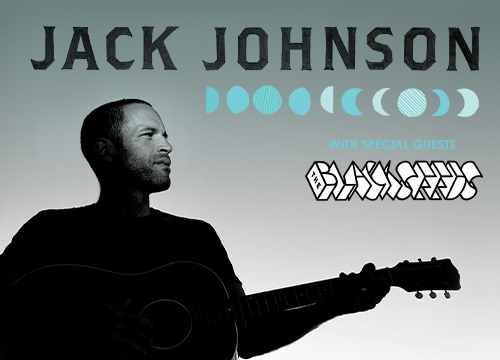 Multi-platinum musician JACK JOHNSON makes his welcome return to Aotearoa, New Zealand this December playing all your favourite songs outdoors and under the stars, touring in support of his latest studio album, ‘Meet The Moonlight’.

Last here in 2017, Jack Johnson’s ‘Meet The Moonlight’ Tour will see the band performing at some of New Zealand’s finest outdoor venues, kicking off the tour on December 10 at The Outer Fields at Western Springs in Auckland before heading to Napier’s Church Road Winery on December 11 to conclude the tour.

Joining Jack on the tour for all New Zealand shows will be Aotearoa eight-piece The Black Seeds. Described as “one of the best live reggae acts on the planet” and with numerous sold out tours behind them, The Black Seeds will bring their new album LOVE & FIRE on tour alongside Jack bringing their raw energy and good vibes to Auckland and Napier.

There is no age restriction for this event. Any person under the age of 18 months does not require a ticket. All other patrons require a valid ticket for entry.

Babies will be admitted to the Venue at the parent’s or carer’s own risk: