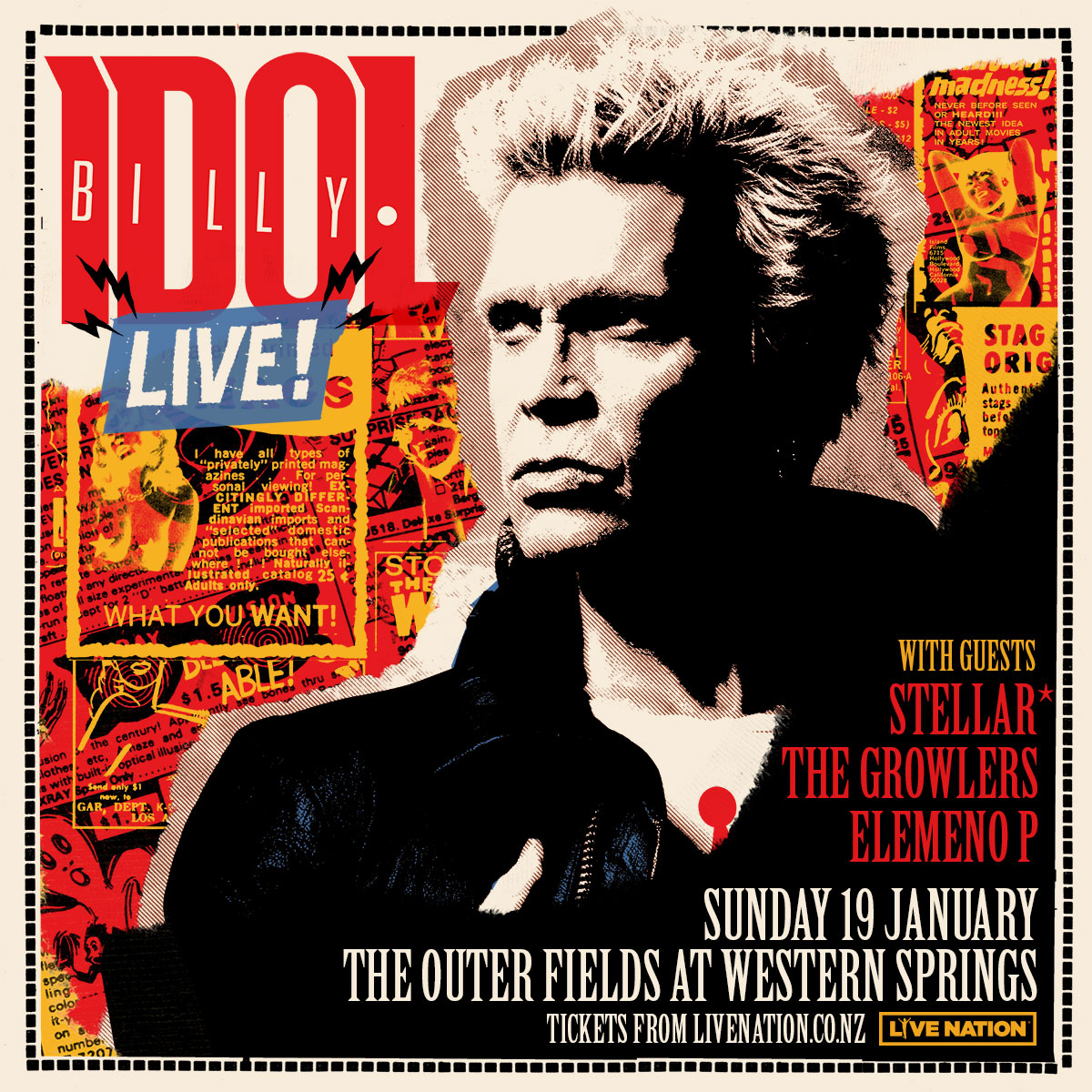 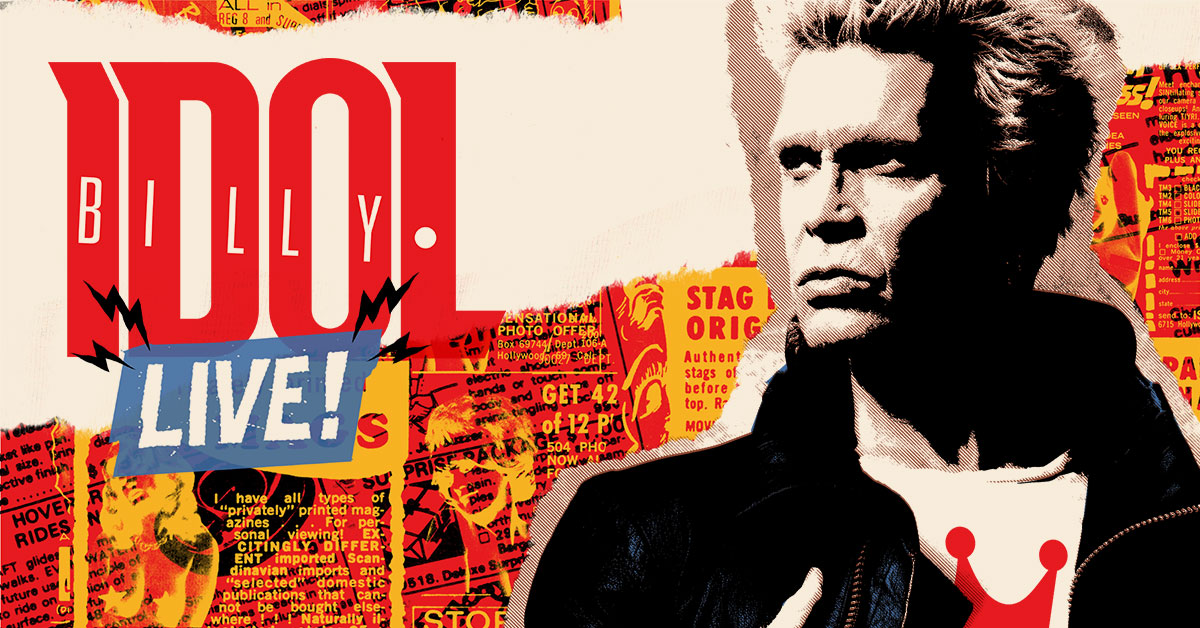 That face, that name, that sneer. Rock icon BILLY IDOL, known for a plethora of hit singles including “Rebel Yell,” “White Wedding,” “Dancing With Myself” “Eyes Without A Face” and many more, returns this summer to perform at The Outer Fields, Western Springs on Sunday, January 19.

Sharing the stage for an epic Sunday afternoon and evening of live music are seminal New Zealand artists Stellar* and Elemeno P.

Artisanal beers, wines and great food, as well as fun attractions, will add to the festival ambience of the day. The event is GA/All ages so bring the family and settle in for a late Summer’s Sunday of great entertainment.

From punk pioneer to global superstar, Billy Idol has left an indelible mark in popular music and remained a household name for over three decades. His style, music, and attitude have transcended time and trend. Born in 1955 in Stanmore, North London, Idol spent several formative years living on Long Island, NY as a child before returning to the UK and emerging as a central figure of the British punk movement. As part of the infamous Bromley Contingent and a fan of the Sex Pistols, Idol was inspired to front the pioneering British punk band Generation X from 1976 until the band’s split in 1981. Determined to break through in America, Billy Idol hooked up with guitar genius Steve Stevens and a crucial musical partnership was forged.

Idol’s lip-curling sneer and fist-pumping persona vaulted him into the mainstream as one of MTV’s first megastars, making him one of the most recognisable faces in pop music, while selling out arenas everywhere he played.  He has sold 40 million albums while scoring numerous platinum albums worldwide, nine top forty singles in the US and 10 in the UK.  Hit singles include ‘Dancing With Myself’, ‘Hot In The City’, ‘Eyes Without A Face’, ‘Rebel Yell’, ‘Mony Mony’, and arguably Idol’s most famed song ‘White Wedding’.

Known for their pulsating live performances, Stellar* return in 2020 to perform a series of special shows to celebrate the 20th anniversary of the release of their 5 star debut album MIX. That album sold 80,000 copies (5 x Platinum) and generated five top 20 singles – ‘Part Of Me’, ‘Violent’, ‘Undone’, ‘Every Girl’ and ‘What You Do (Bastard)’ – all massive radio singles and indelibly etched in the Kiwi music landscape.  Expect a dynamic set featuring MIX in full, more hits, plus their killer version of Sharon O’Neill’s ‘Maxine’ – which took the 2017 Vodafone NZ Music Awards by storm.

In the early 2000’s Elemeno P erupted onto the New Zealand rock scene, seemingly from out of nowhere.  A four-piece with straight-arrow, energetic, power-pop anthems. A succession of massive hits such as ‘Verona’, ‘Every Day’s A Saturday’, ‘Fast Times in Tahoe’ and ’11.57’ followed.

Equipped with a fun-loving attitude, Elemeno P soon became household favourites across the nation, releasing a trifecta of top tier albums in the space of six years.

The band’s debut album ‘Love & Disrespect’ was released in 2003, reaching number #1 on the New Zealand album charts and went on to sell triple platinum. Two more albums would follow, selling Platinum and Gold respectively and leading to the band taking home Best Group at the New Zealand Music Awards in 2008. Elemeno P make a welcome return to the stage in January 2020.

Where: The Outerfields Western Springs

Tickets on sale now - all ages

Dress code: For safety reasons, footwear is to be worn at all times.

We reserve the right to request patrons to present any clothing, bags and other carried items for searching before you enter the venue.

We reserve the right to search vehicles entering the venue.

Persons supplying alcohol to under age patrons will be evicted from the premises.

Entry will be refused if a patron is intoxicated or under the influence of illicit substances.

We maintain a strict ‘no drugs’ policy, illicit drugs are prohibited and will be confiscated at the gate. Any persons apprehended with drugs in their possession will be escorted from the venue. Incidents involving alcohol or drugs will be referred to the police where the situation requires it.

Lost stolen or damaged property – We take no responsibility for any damage to, loss or theft of a patron’s personal property while in or near the venue. Items of value recovered after an event will be taken to the Auckland Central Police Station.

Behaviour – In order to ensure an enjoyable experience for everyone, we reserve the right to deny entry or remove attendees who exhibit unacceptable or disruptive behaviour. There will be zero tolerance for intoxication. Those who arrive at the gates intoxicated will be refused entry and patrons who become intoxicated will be removed from the venue. Intoxicated or under age persons who are apprehended with alcohol will be escorted from the venue.

In extreme cases, a person who exhibits unacceptable or disruptive behaviour will be asked to leave the venue. Dangerous activities such as aggressive moshing, stage diving, crowd surfing and climbing are not permitted and may result in the removal of patrons from the event. Failure to comply with a direction from venue staff, security staff or the New Zealand Police to leave the venue after having been warned to leave may render the ticket holder liable to arrest and prosecution for the offence trespass under section four of the Trespass Act 1980 which is punishable on conviction by a fine not exceeding $1000 or a term of imprisonment not exceeding three months.

Smoking – The Outer Fields at Western Springs is a SMOKE FREE venue. This includes the use of e-cigarettes and vaporisers.

If in any doubt, please leave it at home. We take no responsibility for goods surrendered. Prohibited items will be confiscated and not returned.

Subject to ‘Mobility Access’ below, there is no on-site parking.

The venue is within easy walking distance of central city neighbourhoods, Ponsonby, Grey Lynn, Westmere, Morningside and Western Springs, and bus/taxi/uber distance from Auckland City Centre. There are permanent parking restrictions preventing parking in the immediate vicinity of the venue, and there is very limited street parking in the wider area.

We recommend central city bus links that drop near the venue on Great North Road, the Morningside Train Station, or taxis/ride sharing services.

The Bullock Track will be closed show days, other than to permanent residents who live on the Track.

There are six mobility pass holder car park spaces on Stadium Road beside the venue. There are further mobility pass holder car park spaces situated at the Caltex station across from the venue on Great North Road. These spaces are free but must be pre-booked. Please contact us once you have purchased your ticket on info@crsmanagement.co.nz or 027 327 1684 to book a car park.

There is a mobility patron drop point for cars displaying a valid mobility pass at the corner of Stadium Road and Great North Road.

Venue access for mobility patrons is off Stadium Road near the Great North Road corner (immediately adjacent to the mobility car parks and drop point).

There is a limited capacity Mobility Access stage viewing platform situated immediately inside the venue, which is accessible by Mobility patrons plus one companion each, and mobility access toilet facilities alongside.

Guide dogs are welcome at all events. It would be great if you could get in touch with us before the event to let us know if you are bringing your guide dog so we can make sure you get the best out of your concert experience.

For all other special access requirements, please let us know if you or a friend or family member is attending an event and requires special assistance on: info@crsmanagement.co.nz or 027 327 1684

Authorised Sellers
Please only purchase tickets from the authorised ticketing agent (Ticketmaster). We cannot guarantee the validity or authenticity of tickets purchased from third party sellers such as Viagogo or individuals selling on Trade Me.

Is my seat covered?
The Outer Fields is an entirely open air venue. Umbrellas may not be erected within the stadium during events so if rain is predicted, please bring a poncho or raincoat.

Children
This is an all ages event. Children under the age of 12 can enter for free when accompanied by a full paying adult. One child per ticket holder.

The Outer Fields venue does not allow single-use/disposable cups. We have a partnership with Globelet who provide the venue with reusable cups for all beverage service at each show. It works likes this- when you purchase your first beverage(s), you will pay an additional one time $3 for each cup. When you purchase each subsequent drink, and return the used cup each time, you will be served your new drink in a fresh cup at no extra cost. The used cup will be washed/dried by us and returned to circulation. At the end of your evening, you can either (a) take your cup home as a souvenir, or (b) return it to the ‘Globelet Refund’ tent for a $1 refund, or (c) donate your cup return to our charity of choice, ‘Music Helps’ and we will give the $1 refund to them.

Partnering with Globelet allows us all to reuse recyclables and not waste single serve disposables.

This is an all ages event. Children under the age of 12 can enter for free when accompanied by a full paying adult. One child per ticket holder.