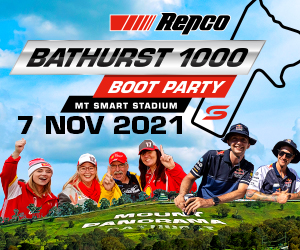 In a win for New Zealand fans, Repco announced today it will be the naming rights partner of the event, which will take place at Mt Smart Stadium on 5 December, to coincide with the Great Race.
For the first time, Auckland’s motorsport fans will have the chance to follow defending champion Shane van Gisbergen, Kiwi Supercar legends Greg Murphy and potentially three-time Supercars’ title winner Scott McLaughlin on the 212m2 crystal clear LED screen at Mt Smart Stadium.

With the postponement of the 2021 ITM Supersprint and the pausing of the Trans-Tasman travel bubble, hosting the Great Race on screen gives Auckland and New Zealand fans a unique opportunity to be part of a Supercars event this year.
A range of tickets are on offer – fans can watch the race from the comfort of a beanbag or picnic blanket on the main field from $25 (early bird) to $200 for VIP access in a corporate suite. Entry to the grandstand and the main field is free for children under the age of 14 who are accompanied by a paying adult.

For those keen to get along to this special Kiwi event, tickets go on sale from 2pm (New Zealand time) today, Tuesday 10 August and are available from Ticketek.
On-screen viewing will be complemented by a festival-style set up across the venue with live entertainment, motorsport activations and demos, special guests, competitions and classic car displays, including memorable Supercars. Fans can wrap up the day at an exclusive After Party.

The family-friendly event will include entertainment for kids and chill out zones at the newly-opened Lilyworld Garden Bar. The race will also be available to view on multiple screens throughout the venue including Lilyworld.
Supercars CEO Sean Seamer has thanked Auckland Stadiums, a division of Auckland Unlimited, for the initiative.

“This is a brilliant way for fans to take in the atmosphere of our Great Race, from within one of Auckland’s premier venues,” Seamer said.

“The concept is a great way for fans of all kinds to come out and enjoy everything the Repco Bathurst 1000 has to offer.

“We thank our partners in Auckland for putting together this event and hope to see thousands of fans at Mt Smart Stadium on 7 November.”

James Parkinson, Director of Auckland Stadiums, said the initiative is a welcome opportunity to open the gates of Mt Smart Stadium to the community to cheer on their sporting favourites and showcase Supercars.

“We are excited to partner with Supercars and Repco to host the passionate motorsport community and their families and give them a taste of what we can offer at our versatile stadium. Whether you’re a die-hard Supercars fan or are just looking for a great day out, Mt Smart Stadium will be the place to be.”

This is a brilliant way for fans to take in the atmosphere of our Great Race, from within one of Auckland’s premier venues